Farewell to Federico Sopeña, 70 years devoted to the poorest of India

The Jesuit Federico Sopeña, spiritual father of Armando Menéndez, (president of DAF), has left us.

Armando Menéndez wanted to say farewell, dedicating the following words to him:


Federico Sopeña, my spiritual father in India has died

He is a holy man, because only holiness makes you immortal, and that is why I use the present continuous, “is” and not “was.” Together with Vicente Ferrer, also a friend, were the two men who have left the deepest mark on my soul. Mumbai will never be the same again without him. He used to pick me up at the airport and with the same affection, he would take me to say goodbye even if it was 4 o’clock in the morning. He had an orthopedic leg, because he lost his leg in an accident with his small motorcycle when he went to work, as he did throughout his life, to the poorest neighborhoods of this great city. He thanked God for that blessing, because he said that that plastic limb was the only thing from his aged and punished body that didn’t hurt. He found a home to many children with AIDS, orphans of parents who died of the same disease plaguing the slums and managed that Spanish families would run with all those expenses.

Father Sopeña was the spiritual and putative father of many children and Indian adults, especially of the Adivasi ethnic group. Fede, along with the Fathers, also Jesuits, Feliu and Massanet, and many others, are and will remain so, the glory of the Society of Jesus in India, followers of Saint Francis Xavier, whose relics I visit in Goa whenever my work in Mumbai allows me.

In our last photo together in 2014, in his very humble room of Vinayalaya, that for him, this was a luxury, accustomed to live in a shack for many years, posing with a book, “Ante la crisis,” that we wrote together, although Fede only prefaces it, because he shunned any prominence.

Considering the different views of other great Indian intellectuals who visited this Jesuit residence of Mumbai, in its pages, we analyze from various perspectives, how easy it is to know God when you give of yourself; as easy as that He comes to meet you without having to do anything other than love those poor who hold out their hands waiting for you to share with them our daily bread. The rest, as Fede used to tell me, is immersed in the darkness of theology, from where you can only come out when you follow the footsteps of Jesus

How easy it turns out to be Christian when your master does things and not speaks. How difficult it is for us to understand those who speak and do nothing. The world needs many Federicos Sopeñas and I since January 25, 2017 feel once again an orphan. My only consolation is that we will see each other again, although I do not deserve to share his place next to God.

The news has been published in the Spanish newspaper LA VANGUARDIA, describing him as “the catalonian Jesuit missionary, Federico Sopeña died yesterday in Bombay (India) at the age of 90, after nearly seven decades helping the most disadvantaged in that country, promoting educational, health and social emancipation projects with local organizations in India, and in 2016 he obtained the Indian nationality.”

CARD PARTNER DAF: ASK FOR IT! 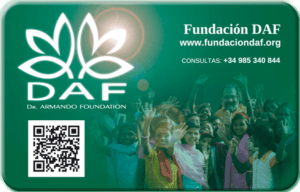 We have SSL certificate